"I wish for you to stand up for what you care about by participating in a global art project, and together we'll turn the world...INSIDE OUT." -JR 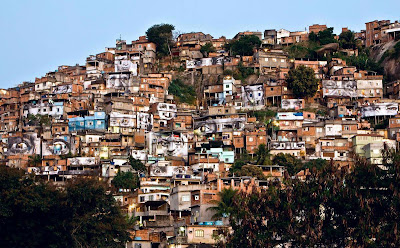 Can art change the world? Yes! Have a look at the 2011 TED Prize winner's wish here:
from TED.com:
Working anonymously, pasting his giant images on buildings, trains, bridges, the often-guerrilla artist JR forces us to see each other. Traveling to distant, often dangerous places -- the slums of Kenya, the favelas of Brazil -- he infiltrates communities, befriending inhabitants and recruiting them as models and collaborators. He gets in his subjects’ faces with a 28mm wide-angle lens, resulting in portraits that are unguarded, funny, soulful, real, that capture the spirits of individuals who normally go unseen. The blown-up images pasted on urban surfaces – the sides of buildings, bridges, trains, buses, on rooftops -- confront and engage audiences where they least expect it. Images of Parisian thugs are pasted up in bourgeois neighborhoods; photos of Israelis and Palestinians are posted together on both sides of the walls that separate them.JR's most recent project, "Women Are Heroes," depicts women "dealing with the effects of war, poverty, violence, and oppression” from Rio de Janeiro, Phnom Penh, Delhi and several African cities. And his TED Prize wish opens an even wider lens on the world -- asking us all to turn the world inside out. Visit insideoutproject.net ... 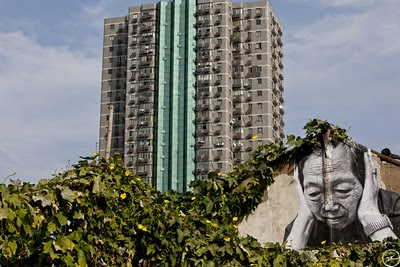 "I would like to bring art to improbable places, create projects so huge with the community that they are forced to ask themselves questions."
JR, Beaux Arts Magazine
Share 0 Tweet